Alicante is a city with a great tourist attraction, not only for its great weather, beautiful beaches, extensive shopping area, varied cuisine and proximity to many other tourist areas, but also because Alicante is a city full of sights and places to discover, one of them is the new ride “La Luz de las Estrellas” (´Light of the Stars´). 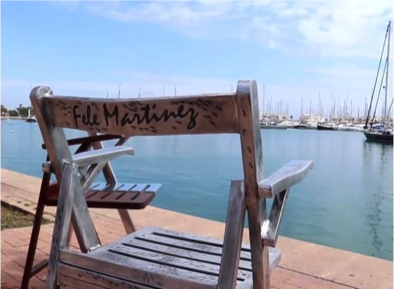 The ride called “Luz de las Estrellas” was inaugurated on March 24 this year by the president of the Port Authority of Alicante, Juan Ferrer, accompanied by the Mayor of Alicante, Miguel Valor, and the Film Festival director of Alicante Vicente Seva, along with some of the Spanish cinema honored celebrities at this ride like Terele Pávez, Antonia Sanjuan, Fernando Guillen Cuervo or Emilio Gutiérrez Cava

The ride consists of a series of chairs made of different materials in the form of street furniture, each different and personalized with the name of the honored cinema artists. These chairs have served as a double tribute to both the film, recalling the chairs used by artists in the shootings, and to the city of Alicante, recalling the typical chairs used in the Alicante ride called “La Explanda”.   The proposal for this ride called “Luz de las Estrellas” departed from Vicente Seva, director of the Alicante Film Festival, who was attended at all times with the support and involvement of both the city Council, and the Port Authority of Alicante which took him into public domain.    This is one of the curiosities you can visit during your stay in Alicante, among many others we will recommend you along in our website and in our own hotel if you decide to spend your holidays in a different way, at Hotel Alamo, of course.