THE CAPTIVATION OF THE SQUARE GABRIEL MIRO

Do you know the square Gabriel Miro of Alicante? From the receipt of our hotel Alamo we want to invite you to know the magnificent history of this square, which is located to less than 5 minutes walking from the hotel. In turn, we invite them that they lodge in our rooms and enjoy a small elopement to discover the captivations of our dear city. Call us to discover the offers and promotions that we have prepared for you in the hotel Alamo. You you it cannot lose!

If there is a romantic and suggestive square in Alicante this it is The square Gabriel Miro, is a special place with very much captivation placed in the heart of the center, where we invite you to walk without hurry and to captivate yourselves of the whole history that count his trees, buildings ancient and remodeled with pleasure. The square Gabriel Miro is special for many motives and one is the life that appears of his gigantic ficus who speak about the step of a calm time and without hurry and who wrap this so special site.

The square is known also as Plaza of Post office, since there the headquarters of Post office locate, a magnificent modernist building newly restored that adapts chord to the environment that it wraps. Former it was known as square of the Boats, because up to her the crafts could come. Later it was named An Isabel’s square ll and finally baptized with his current name.

The square Gabriel Miro is in a strategic and central place of Alicante, closely together of the principal commercial district of Alicante and very next the Old town. It receives his name in honoring to the from Alicante writer Gabriel Miro, a bust of the personage in one of the ends of the square like that expresses it. In the center one finds a majestic source of the year 1918 that receives the name of Source of The Aguadora, work of the sculptor Vicente Bañuls. In her we estimate a curious scene: in the highest part of the figure of a woman in foot with a water pitcher that falls down on the figure of a faun. The work is completed by other forms, as an animal of diabolical aspect or a sileno by tail of fish that holds to a goose that fights to escape. 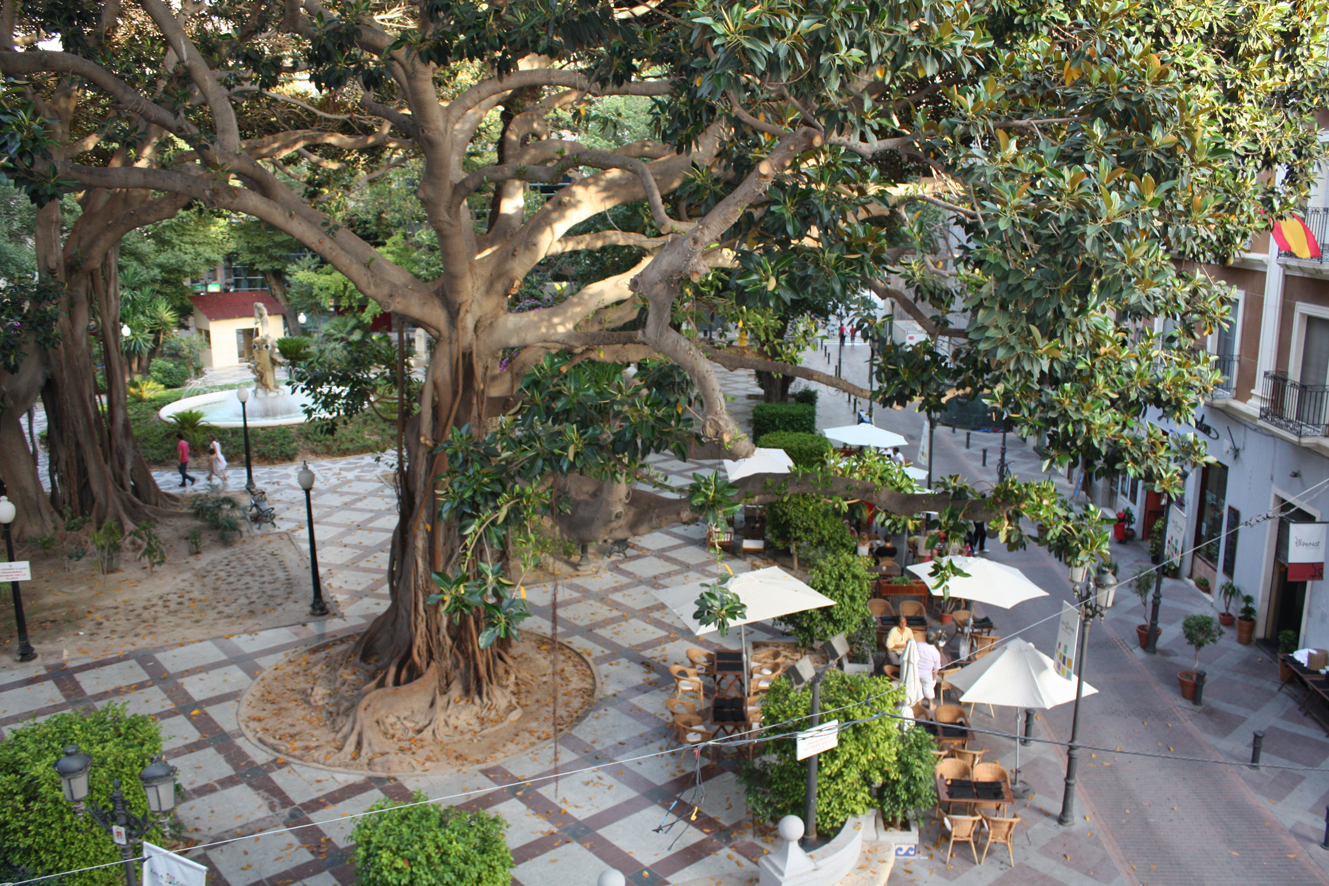 Between his elements stand out old elms that overcome 150 years, several centenary ficus (one of them considered by the experts as the most ancient of Spain) that speak for if alone of the history of this square. The street San Fernando gained territory to the sea with the rubbles of the former wall, it is for this reason that the square received first the name of square of the Boats, since former the ships were coming up to her.

The square is an epicentre of many cultural activities and folk. A painters’ meeting takes place on many Sundays, actions are celebrated folks, happen from models of the trades of the zone, infantile theatre every Sunday and just before Christmas it is a classic Nazarene Street market and living Bethlehem that there is celebrated, between other celebrations throughout the year.

In the same way in the square it is possible to enjoy in turn bars, restaurants and terraces inside a calm and calm environment that contrasts with the merriment of the nearest streets that shape the downtown of Alicante. It is a square that transports you without realizing to last epochs.

It is a memorable square that you must visit and wrap you inside his history and his captivation that they are the only and particular in Alicante. Your stay reserves in the hotel Alamo and enjoys all the surprises that wait for you during your elopement, leave you to surprise! Call us to obtain major advantages and discounts and prepare yourself to receive the best treatment on the part of our personnel. The experience lives and fall in love with Alicante!